Ah, the Great and Mighty Tutorial, feared across the gamedev land.

This key witness, this first impression, this emissary from the creators who holds in its hand the fate of a game's reception.

A good game can have stupendous gameplay and graphics, but with a bad tutorial, it may not matter. And we know it. Tutorials keep us up at night, and not just because we're working in our spare time.

If a tutorial takes too long or talks too much or has a bad difficulty curve or can't be skipped, your player may not even get to the gameplay. They can be big sigh inducers when someone's looking to hop into a game really quickly.

It's often tempting for a developer to just jump into making a tutorial. Slapdash is often a good way to develop prototypes and iterate, but instructing players how to play your game in an engaging manner needs some extra care, and lots of play testing.

For indie devs, play testing can be hard. We drag our friends in, kicking and screaming, and you only get a blank slate from a player once. They become just like the devs, blinded by a functional knowledge of the game's mechanics. They may not get hung up on a vague instruction since they've been through it before and have the benefit of the creator standing right there to explain things.

For me personally (that is, Clayton), tutorials have been a terror. Can you tell? Our puzzle game Splotches isn't all that complicated, but it has enough to teach that tweaking the formula to the happy medium has been a long process, and one of the big hangups on release. Austin and I want to have an easier time with Match Point, so we're setting out from the beginning to do this thing right. 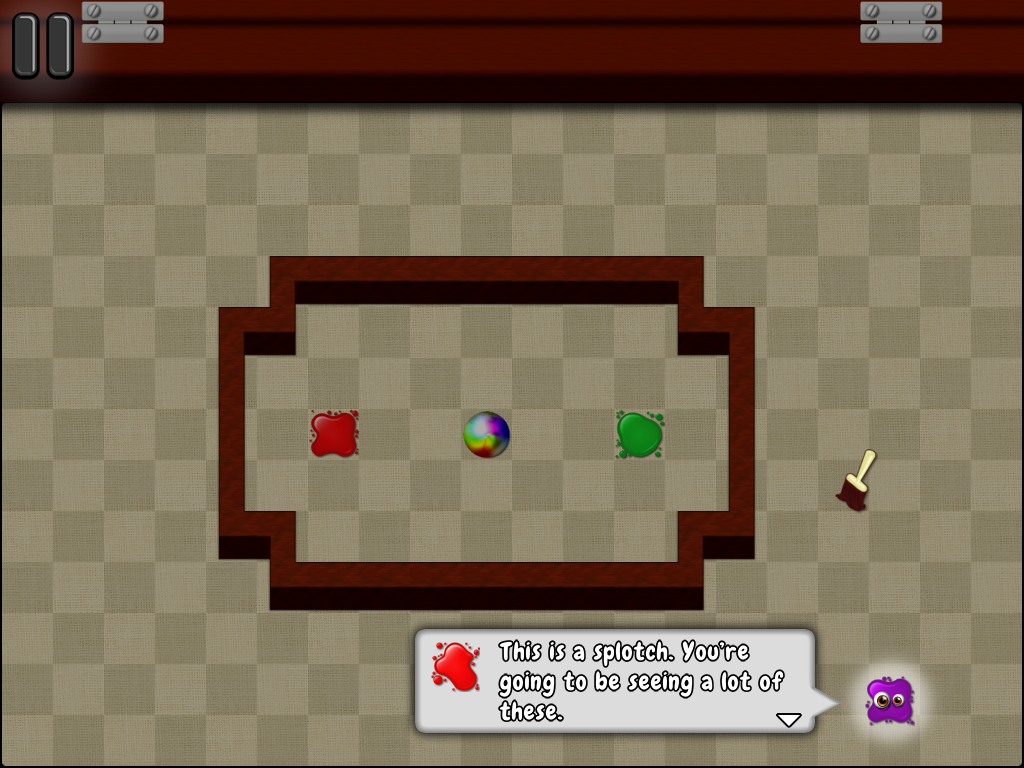 We dedicated an entire work session just to talking about the tutorial. No developing. No touching Illustrator or Unity. Just talk. As convenient as remote work is, especially in a threadbare gamedev town, there's nothing like a face-to-face to pack in progress on a project. We walked through and chewed up and shot down as many ideas as we could, and the elimination of communication latency let us build and understand each other so much faster and thoroughly than Trello or Facebook Messenger would allow us.  We discussed minimizing language both to appease those with short attention spans and to challenge ourselves to optimize the delivery method as much as possible--if we can teach through play, we should. Plus, localizing instructions scrunched into a UI is v hard. 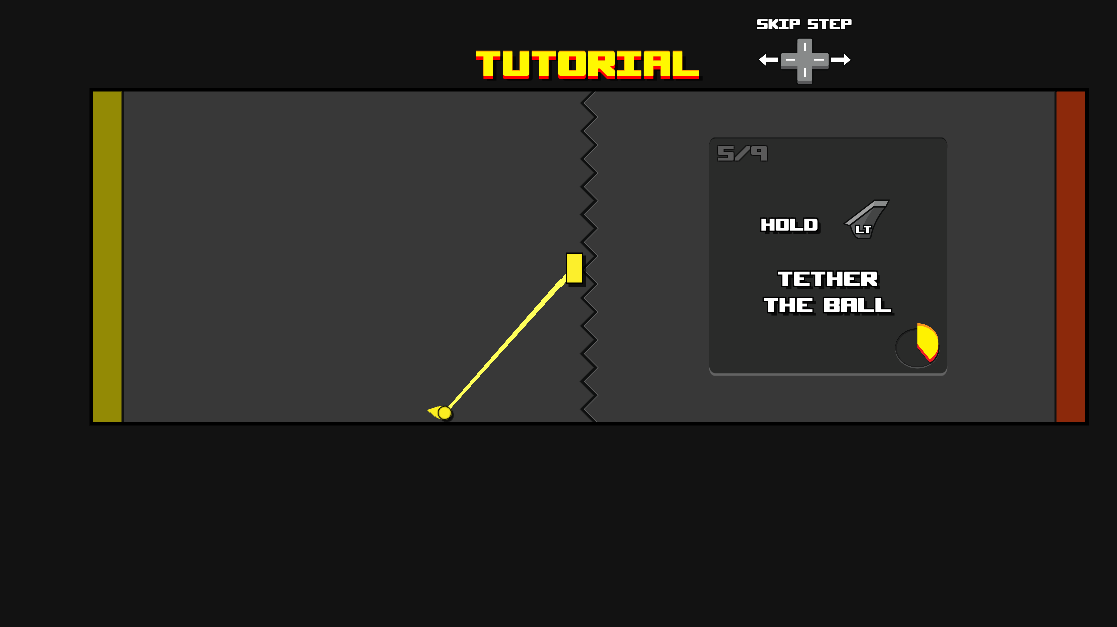 We didn't want text to interrupt or obscure gameplay.

We also worked through what we felt was absolutely necessary to convey explicitly and what could be left to intuition and experimentation. Balancing the joy of discovery and economy of time with eliminating confusion is even harder when you're targeting a wide range of players. We know most of your grandmas are already hardcore gamers these days, but... just in case.

Sometimes, practicality demands compromise. It can feel "icky"--impure or messy or fragmented. We distilled everything and still had a weird group of info we didn't have a good place for. The plan for now is to make a separate tips 'n tricks section for pro players who want to hone their talent with the finer points of the game's physics. One of the reasons we like this solution is that it'll be another avenue to inject some humor.

Austin's worked hard on tweaking velocity and friction and impulses and acceleration to create enough texture for serious players to become wicked good at the game without leaving n00bs in confusion that calls for even more text. Text, text, text. We know you don't care though, since you're this far into this blab of a devlog. 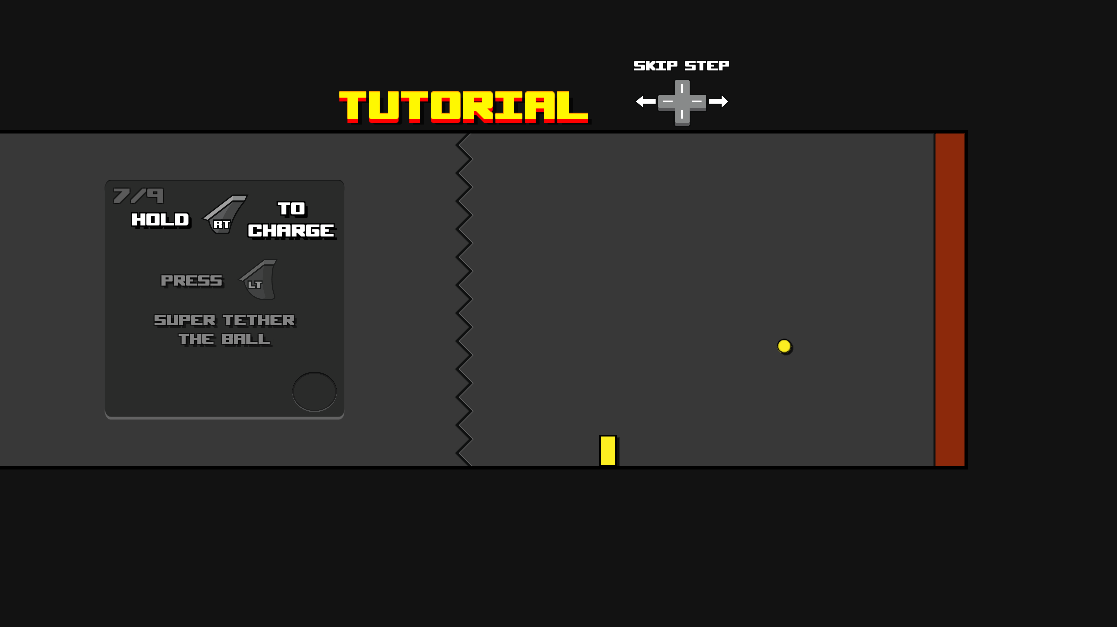 This part (reasonably) confuses some people.

Even after our hyperfocus, we're still tweaking as we gain input. If there's anyone out there who's hit a tutorial on the nose first try, become their apprentice and do all their dishes and laundry for them because they are brilliant and poor and filling way too many development roles.